Professional golfers typically make the draw look effortless. They spend countless hours practicing this shot because they know how useful it is.

Every golfer would like to have this same level of skill when making a draw shot, but many people find their draw becomes a nasty hook. You can overcome this if you know which steps to take. With the help of this guide, you will soon have a consistent draw.

This shot begins to the right of the target you are aiming for. It then turns back toward the target line as it flies. A significant amount of forward spin leads to the ball moving forward once it lands.

Mastering this shot isn’t easy, but it can be done. The following guide explains how to hit a draw in golf easily, so the average golfer can hit this shot every time they hit the golf course. Once you master this shot, it takes your golf game to the next level.

What is a Draw?

Imagine the fade ball flight and reverse the ball’s direction, as the draw is the opposite of a fade ball. However, if the ball moves rapidly from right-to-left for right handed players, golfers refer to this as a hook, the counterpart to a slice. The same holds when the draw goes too far.

Unless you are attempting to hit a straight shot, aim to hit a draw or fade. Golfers find them to be the easiest ball flights to control.

When Should You Use the Draw?

Certain golfers find they have a natural draw swing as their normal swing. They end up fighting it when they shouldn’t. However, you may not naturally have a draw swing and find you need to hit a draw to work the ball around a hazard. You might need this right to left movement to place the ball for your next shot.

Wind conditions may dictate the need for you to hit a draw. A skilled right-handed golfer can use this golf swing to draw the ball into the wind, and the same holds for those who are left-handed. This helps to minimize the wind’s effect on the golf ball.

At times, the hole location may require you to hit a draw in golf. You need the golf ball to roll left after it lands, and this golf swing will help achieve that goal.

The Benefits of the Draw

Hit a draw and you can consistently move the golf ball five to 15 yards further. The actual distance depends on the speed of the fairways. If you are fortunate, the ball may go even further.

In addition, the ball rolls when it lands on the ground. The top spin produced when you hit a draw leads to this extra distance being achieved.

Ball Flight Laws and Their Role in Hitting a Draw

Most golfers don’t sit around discussing ball flight laws, but having a basic understanding of these laws is crucial to improving your game. With this knowledge, you can determine why you hit the ball a certain way and make adjustments to your swing.

These laws have changed over the years. In the past, golfers believed the club’s swing path would determine the shot’s initial direction. The direction of the club face would control the curvature of your shot. Thanks to technology, you now know that the exact opposite is true, which is important when you hit a draw.

Because of these new ball flight laws, you may not need to make as many changes to your swing as you envisioned. Minor alterations to the swing path could allow you to hit a draw consistently.

The Steps Needed to Hit a Draw

If you want a consistent draw, follow the steps below every time you go to make a shot. Golf drills that require you to repeat these steps become of great help in making this shot second nature.

You need a neutral grip when attempting to hit a draw. This neutral grip allows you to attack the ball from the inside swing path.

An inside out swing path leads to the golf ball curving to the left. Spend time conducting drills with different grips before attempting to use a new one during a game.

Identify the target and aim to the right of the target line if you are a right-handed golfer. Left-handed players need to do the exact opposite. By doing so, you are encouraging an outward downswing path.

Place the ball slightly back in your stance when you hit a draw. This adjustment allows you to carry out an inside-out golf swing.

Moving the ball back encourages an in to out path and an outside swing path. The ball starts to the right of the target line for a right-handed golfer to induce draw ball flight.

You may be too close to the ball if you find you cannot produce this inside out swing path. Move slightly back.

This slight change will allow you to open your body on the downswing. Your club face will follow an in to out path while remaining closed at impact.

Open the clubface so it points slightly to the right of the target. Your golf ball must leave the clubface to the right initially. This will allow it to curve from right to left in the air. The clubface must be closed relative to the desired path while remaining open to the fairway for a successful draw.

Turn your feet so they point directly at the target. Close the stand until your feet cross the clubface line.

This allows the clubface to be open to the target line and closed relative to the stance line. This stance will produce the right to left spin needed for a draw.

Once the stance is correct, slowly close the club face. It should point directly at the target when you hit a draw. If you are positioned correctly, your body should face the right-hand side of the hole while the club faces up the middle.

As you close the club face, your grip on the club will change. Without changing your setup or club alignment, move the left hand on the club so you can see three knuckles once again. This ensures you hit a draw rather than making another shot.

Swing Along the Feet to Establish an Inside Out Swing Path

When you are ready to swing the club, do so along the body. You will feel as if you are swinging toward the right of the target.

Many golfers try to correct for the fact that their feet aren’t aligned with the target and this is where their draw goes wrong. You must swing the club inside on the backswing to get this swing path. This produces the draw ball flight.

By moving the club head along an outside path from the top of the backswing, you allow the clubface to hit the ball closed to the swing path. This generates the desired right to left sidespin.

As you complete the downswing, optimize your hip rotation. This allows you to send the club head on the outside line. Ensure you have sufficient rotation to prevent a hook shot rather than a draw.

On the other hand, you don’t want your hips to clear too early when you hit a draw. If this happens, you may have an open club face when it hits the ball. This will push or slice the shot. The shot may also fly straight, resulting in the ball landing to the right of the target.

Follow through is crucial to a successful draw. It ensures all the steps you previously took come together to move the ball along the desired flight path.

As you finish your golf swing, your chest should be out and your right shoulder should face the target. This is the correct position when you finish the swing.

The follow through helps with shoulder rotation, the inside out swing path and weight transferral. If you don’t follow through, your chest will be sunken, the club won’t make it to the left shoulder, the weight will remain on the back foot, and the ball will travel to the right.

Slight changes need to be made in this process, depending on which club is being used when you hit a draw. The size of the club dictates which adjustments need to be made.

When using a driver for a draw shot, you must control the club face. If it opens too much, you will end up with a slice rather than a draw. Ensure you have the right grip to reduce the risk of this happening.

Keep the club face square at impact and use the hips to rotate the body when you hit a draw. Swing inside-to-out and finish strong. Decelerating as you swing will often lead to an open club face or altered swing path. You won’t get the desired right to left spin.

Irons are shorter than drivers, making them easier to control when you hit a draw. Rotate back with the body rather than using the arms and hands to manipulate the club.

Don’t sway when doing so. Furthermore, you need to consider the added weight of the iron, as these clubs are heavier than drivers.

Don’t flip your hands on impact. Many golfers make this mistake, which leads to the club being closed and a hook shot. Square the club face with the body rather than the hands to hit a draw successfully.

When you hit a draw, the golf ball will fly lower than it does with fades and normal straight shots. The ball will also roll a farther distance when it lands. It does so because you reduce the club’s elective loft when you set up the shot.

The closed club face leads to the reduced loft, which allows the ball to roll further. Take advantage of this in a golf game to lower your score.

Once you master this shot, making shots that once seemed impossible become easier. Practice these steps until they become second nature. Before you know it, it will become effortless to consistently hit a draw shot perfectly every time. 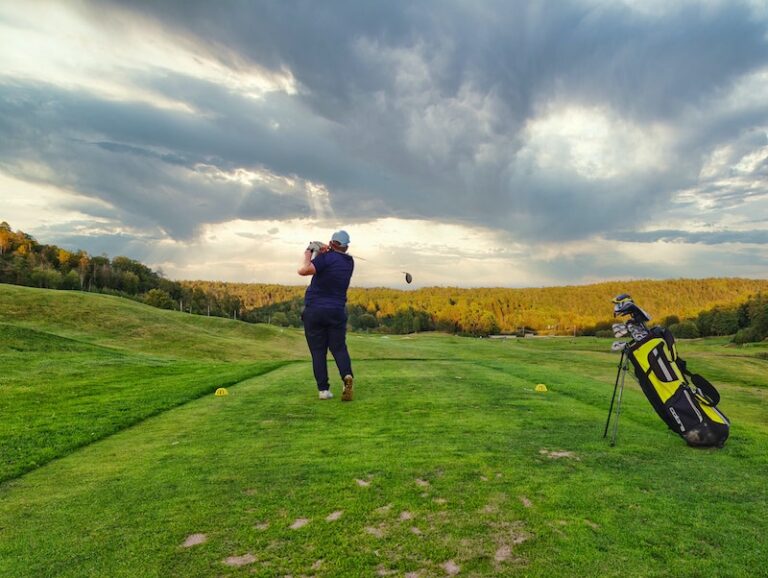 Amateur golfers often seek help when they need to know how to fix a slice in golf. This problem remains commonplace today, but fear not. It is easy to fix than you think.

By taking the time to properly organize your golf bag, you can stay focused on your game while being prepared for both the routine and the unexpected at the same time. 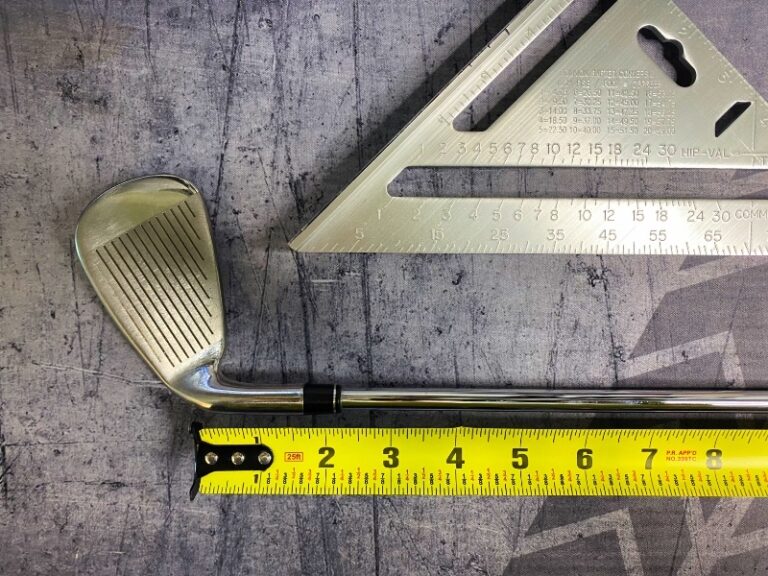 Players today have tons of options for golf clubs, including the ability to find clubs that fits them perfectly and help improve your game.

This post explains how to grip a golf club. We explain each step of finger placement and also warn of common mistakes that beginners make. 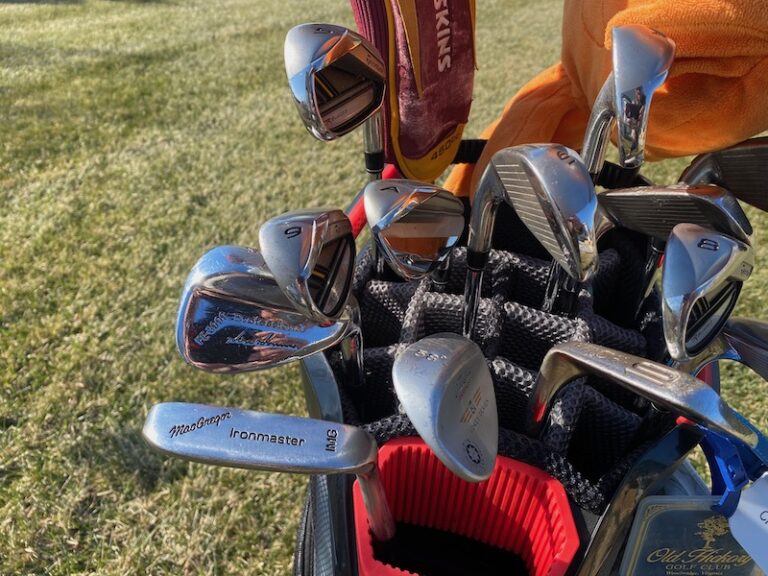 According to USGA Rule 4.1b you are allowed a maximum number of 14 conforming clubs in your golf bag. This includes both your driver and your putter. 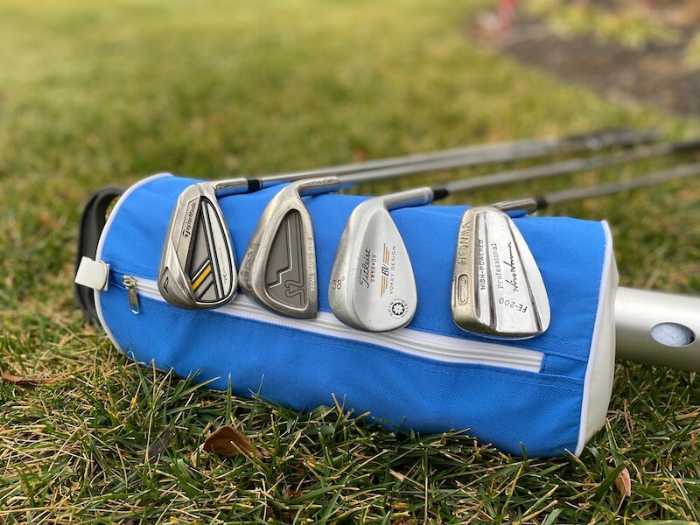 This article is about how to chip in golf. Readers will gain a basic understanding of how to chip a golf ball on to the green, what club to use and other key tips.

Kalani began golfing soon after he could walk. He started competing in junior golf at the age of seven, made his first hole-in-one at 15 and went on to captain his high school golf team as a four-year varsity letterman.

Disclosure: Some of the links in this article may be affiliate links, which can provide compensation to me at no cost to you if you decide to make a purchase. These are products I personally stand behind. As an Amazon Associate I earn from qualifying purchases. You can read our affiliate disclosure in our privacy policy.